I decided to wear a blazer/trousers combination today. The blazer is a dark green (hunter green), single button, peaked lapel version. The trousers is dark brown and the shirt is of lemon color. Today I am wearing a pair of  reddish brown double-monk shoes. I have not changed my watch today. 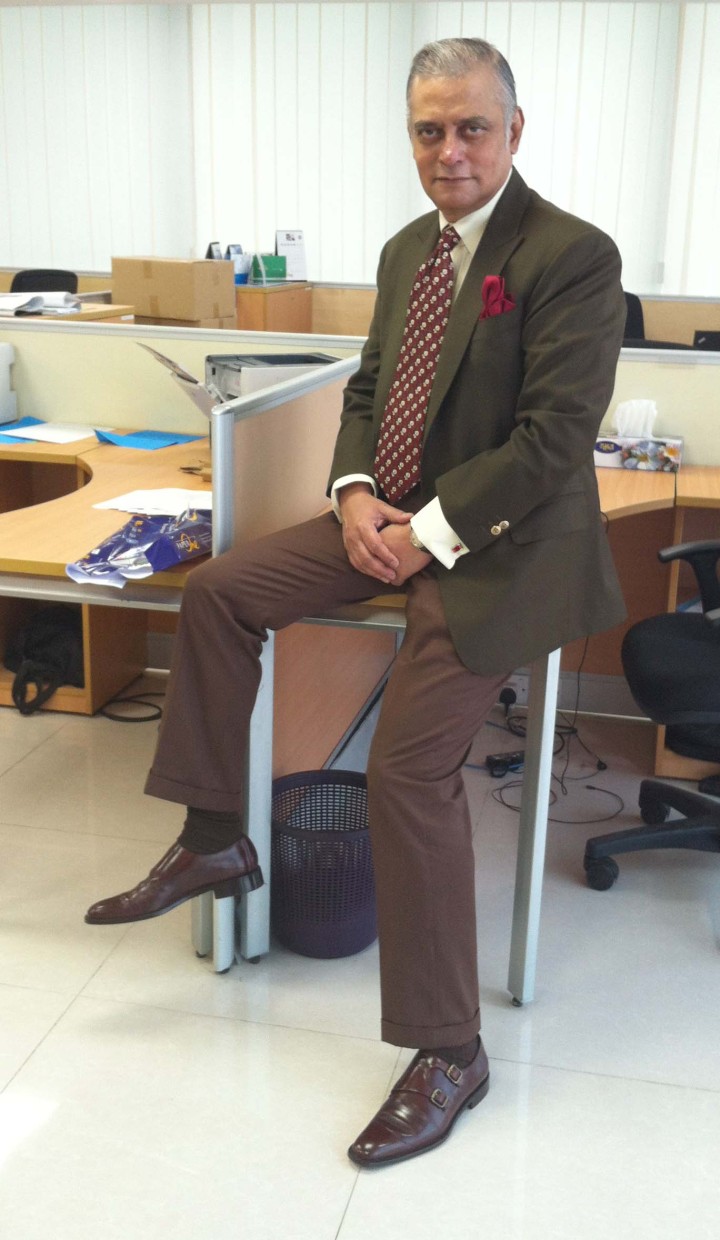 Dhaka city is particularly quiet today. Very few transports are in the city; the office attendance is also much less than normal. The reason is the oppositions “Grand Rally,” and the subsequent response of government lead by the ruling party “impenetrable Dhaka.” Therefore, I decided a leisurely attire would be appropriate.

Today I an wearing a tan 2-button linen suit, a blue/baby blue french cuff linen shirt, a maroon/black/white horizontal stripe tie, a blue patterned pocket square, and brown suede monks. Therefore, today I am wearing not only all patterns but also I have also mixed various textures. 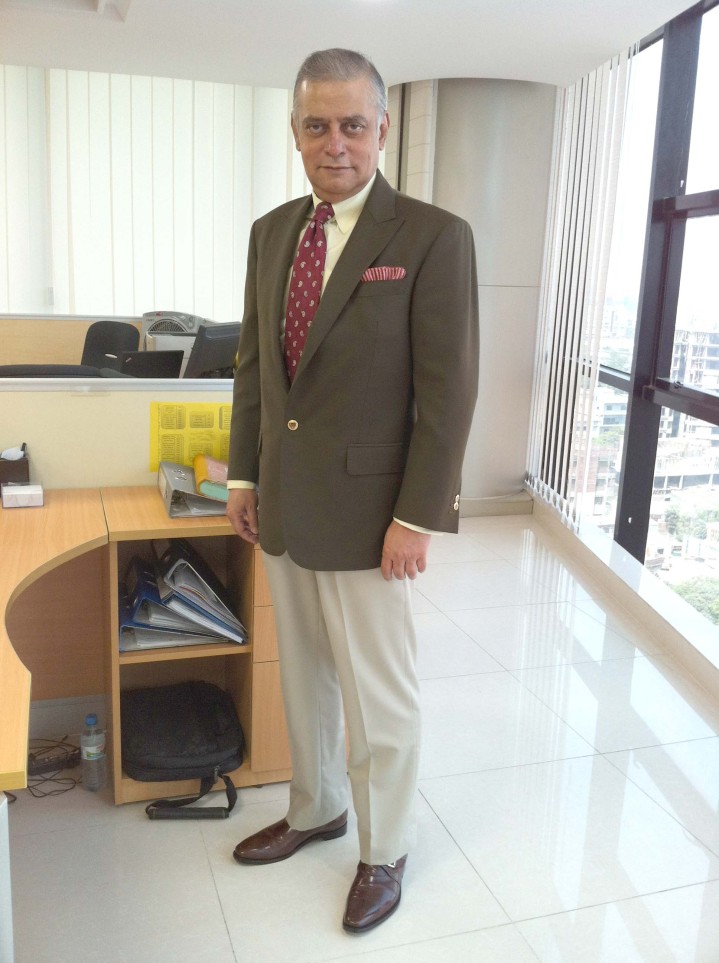 Today I decided to go with a blazer/trousers combination. The blazer is a dark green, 1-button, peaked lapel, with metal buttons. I have chosen to wear the blazer with lighter colored trousers and lemon tabbed collar french-cuff shirt. I thought a pair of burgundy monks would go nicely with this rather causal outfit. I have chosen to wear a burgundy necktie with Persian pickles (paisley) in it. Today’s pocket square is check cotton in blue/maroon color. 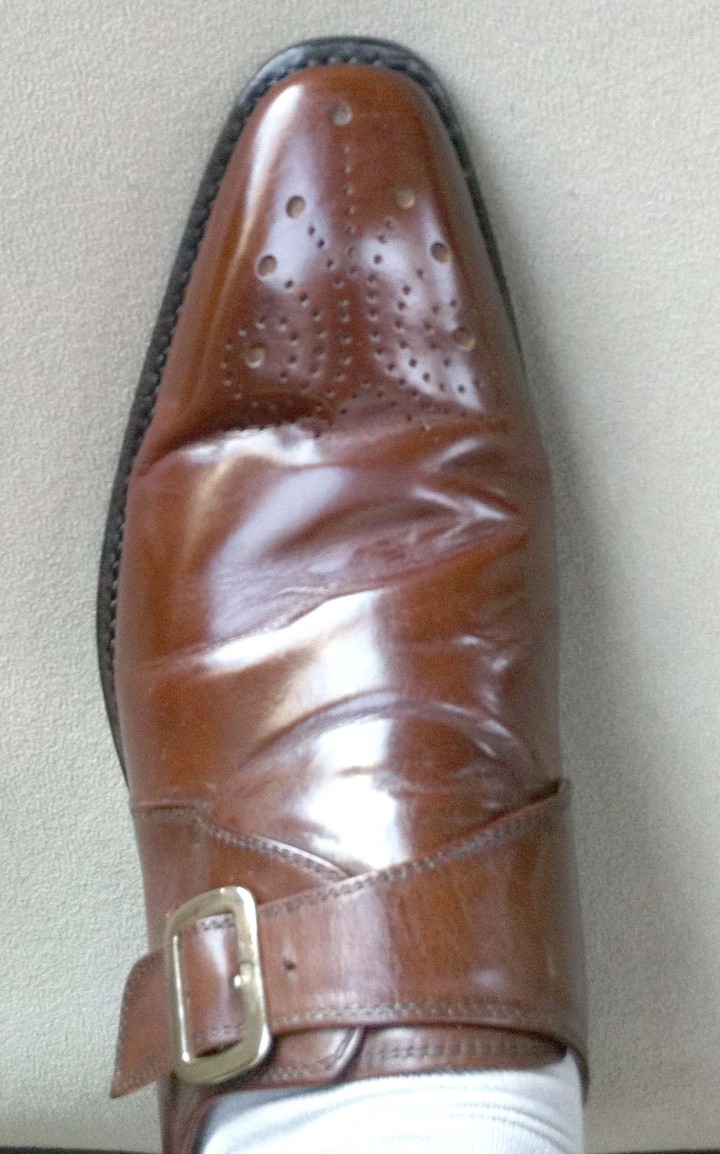 Slowly the pleasant days of winter is melting into the hot and humid summer. I thought it was time to dust and steam my linen suits and get ready for summer. Today I was wearing this linen suit with a gingham linen shirt. As it’s always wise to pair a solid tie with a gingham shirt, I chose this dark blue silk knit tie and a blue pocket square. The suit looks white but it’s actually a black pinstripe over tan/white background. Today I am wearing a simple black Skagen dress watch.

Details of suit, shirt, and wrist watch clearly visible below:

today’s shoe is a black double monk, as shown below:

Oxford shoes are also known as Balmorals in America. This is the most formal of all shoes for men.

The oxford is a laced shoe. The simplest shoes are the most formal. Any decoration such as brogueing makes the shoes less formal. The most formal color is black.

Derby shoes are known as Bluchers in America. These shoes are very similar to oxfords; the only difference is that while oxfords are closed-laced, the derby shoes are open laced. Oxford shoes do not have leather flaps which are closed by a lace; instead the laces close a gap in the middle of the shoe.

Monk shoes do not have laces. Instead the shoes are closed by belts and buckles. Monk shoes may have one, two, or three belts known respectively as monk (1 belt), double monk (2 belts) and triple monk (3 belts).

Brogues shoes are shoes with decorative perforations. Brogue shoes are normally oxfords or derbies. Technically, however, any type of shoe can be brogued.

These are typically lace-less shoes for mostly informal wear.